Posted by Unknown at Tuesday, November 15, 2011 No comments:

"When governments stop torturing and killing people, and when corporations stop abusing the legal system, then perhaps it will be time to ask if free-speech activists are accountable,"

He's the one who made me inspire, and I hope, Even you too..!! @prasadz 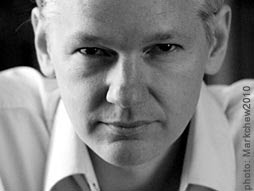 An Australian Internet activist and former hacker who is on the advisory board of the secretive Sweden-based website WikiLeaks and also the editor-in-chief of the site, which posts confidential documents. Through the high-profile document dumps of U.S. files on the Afghanistan and Iraq wars, Assange became known as the spokesman of the organization and says he is constantly on the run from governments investigating the site. “I am the heart and soul of this organization, its founder, philosopher, spokesperson, original coder, organizer, financier, and all the rest," he has been quoted as saying.

Born in 1971 in Townsville, Queensland, Australia. His parents ran a touring theater company and he moved around frequently as a child, leaving home when he was 17. He has one half-brother from his mother's second marriage to a musician and reported cultist.

Assange studied math and physics at the University of Melbourne from 2003 to 2006. As the result of a live-in relationship he has a 21-year-old son, Daniel, who is a computer whiz in Melbourne. He was embroiled in a custody battle with his ex-girlfriend after Australian Federal Police raided their home on hacking charges. After the July 2010 of Afghanistan war diaries, Assange faced rape and molestation allegations in different incidents in Sweden.

Assange professes to believe in "radical democracy," in which online activism reigns supreme and transparency exposes secretive actions of government. “When governments stop torturing and killing people, and when corporations stop abusing the legal system, then perhaps it will be time to ask if free-speech activists are accountable,” Assange has said in response to his critics.

Assange's career as a computer hacker, dating back to the late 1980s, resulted in him pleading guilty to 24 charges of hacking in 1992. He began working as a computer programmer in 1994. He researched the 1997 book "Underground: Tales of Hacking, Madness and Obsession on the Electronic Frontier," which detailed the exploits of an international group of hackers. WikiLeaks was founded in 2006, with Assange as editor-in-chief. He's won a handful of awards related to the website, including the 2009 Amnesty International Media Award (New Media) for "The Cry of Blood – Extra Judicial Killings and Disappearances" in Kenya.

WikiLeaks has come under fire from various governments for leaking confidential documents, with some considering how legal action can be taken against the organization. Stemming from this, Assange admittedly lives like a fugitive, using encrypted cell phones, checking into hotels under false names using cash, dyeing his trademark pale hair. Still he has embraced the spotlight, reportedly to the discomfort of other WikiLeaks members, holding press conferences and even speaking at hacking conferences. Sweden is investigating him on rape and molestation allegations, charges he claims are a smear campaign.

“Full source material is what helps keep journalism honest. It’s independently checkable in a way that a scientific paper is checkable. It’s time that the media upgraded its capabilities along those lines.”

Posted by Unknown at Saturday, November 05, 2011 No comments:

Humanity Is My Religion

The Party Of The Young Generation